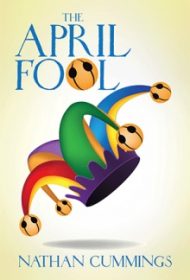 The warning of buyer beware is nowhere more needed than in online dating, where biographies are often enhanced, if not entirely fabricated. Nathan Cummings’ novel, The April Fool, explores this world in which 71-year-old Jack—lonely, lost, and soon-to-be-divorced—readily enters.

Too quickly, Jack discards all common sense and begins an online relationship with a much younger woman in another country. “Mary” immediately professes her love and begins to ask for money. Never a good sign, but Jack, an accountant, is vulnerable and soon all-to-willing to meet her constant need for emergency bailouts, believing himself deeply in love and willing to silence any internal doubt over the course of 40 days.

Cummings—also an accountant and the same age as Jack—has the makings of an interesting character study in this cautionary tale, touching on themes not often explored, such as silver-haired dating and the fictions people tell themselves when they need them to be true. Jack is incredulous when Mary calls him “mi amor” (my love) in their first exchange. “Must be the millennial generation’s new way of doing things. After all, she was in Europe, and they do things very differently,” he rationalizes. And then poof, doubt disappears.

Sadly, after setting a tantalizing table, Cummings skimps on the entree. The “romance” marches along without pause, told through increasingly urgent and provocative text messages and emails, but there’s no context offered of his life before or why he might be so easily ensnared. And other than some roadblocks thrown up by money transfer agents, there’s no mention that others in his life are noticing a change in him or that he’s noticing a change in himself. The story’s conclusion is inevitable but comes so abruptly and without explanation that it makes little sense and feels incomplete.

Without more character development, Jack comes off as pathetic and unsympathetic. A richer portrait would make his foibles understandable. As is, Cummings’ promising idea ultimately  fails to deliver.