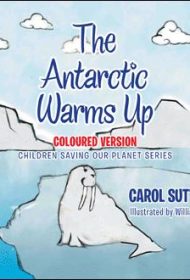 Carol Sutters’ The Antarctic Warms Up is part of a series aiming to show young readers the impact of climate change.

The picture book features a mother watching a documentary about the Antarctic with her children. She narrates the bulk of the book, including scientific explanations, however, making the documentary premise superfluous.

The book starts by explaining where the Antarctic is located and that humans are believed to be causing global warming, yet it never provides much information on how humans drive climate change, instead focusing on regional winds that might carry warm water from the equator.

Later, it discusses Antarctica’s place in the carbon cycle but doesn’t clearly make a connection between carbon and global temperatures. The book ends by talking about rising sea levels and melting icebergs, concluding, “This is a catastrophe.” Unfortunately, readers aren’t given any sense of how the problem could be slowed or reversed.

The illustrations have soft lines and muted colors, and many are framed as if they are seen on a television. Rather than being full-page illustrations, these fill only ¾ of a page, making them seem like afterthoughts, not planned to the book’s size and format. Though not memorable, they complement the text.

Additionally, typos abound, including the misspelled words “Artic Circle” and “Antartic Circle” on a depiction of a globe.

The characters, although named, aren’t given personalities or points of view. Instead, they function as tools to present information. With vocabulary that feels more like that of a textbook – “accelerating ice loss,” “invaded by microplastics” – yet fails to clearly communicate how climate change and Antarctic melting function, The Antarctic Warms Up falls somewhere between story and lecture, never quite cohering.

Antarctic warming is an important and complex topic, but this children’s book misses the mark on many levels.