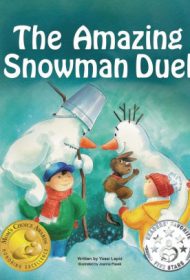 A compelling winter story with a twist, The Amazing Snowman Duel is part of a series about talking, walking snowman Paul, who befriends a human boy named Dan.

As the story opens, Dan and Paul discover that Dan’s human friend Bill has built a snowman bigger and meaner-looking than Paul. Bill challenges Paul to a midnight duel with his snowman Nick. Paul accepts, but notes that there are special rules in snowman duels, although he doesn’t say what they are.

Tension builds as people and animals from around the world flock to the spectacle. Meanwhile, Dan becomes worried for Paul, who doesn’t have the same armor or huge stick that Nick has. On the night of the duel, Dan covers his eyes to avoid watching what he believes will be a rout. But soon Paul yells out that he’s won and explains that snowman duels are actually staring contests and that he and Nick are really fast friends. The whole fight, admits Paul, “was just pretend.” After the duel, the group enjoys cocoa around a campfire.

The book is narrated by Dan in a rhyming format and the story draws readers in, thanks to the high stakes and captivating, dream-like illustrations. Paul’s gentle demeanor makes him a winning protagonist, and the threat to him feels real until the very final plot twist is revealed.

Even as the story, closes, however, it’s unclear whether Bill knew about the rules of snowman duels when he first set up the situation—and if he did, why they would all leave Dan, who was clearly worried, in the dark. More clarity on this point would help young readers better navigate the story’s world and various relationships and understand how secrets influence friendships. As is, it’s not clear what message the book was meant to convey.

Still, the story is sensitively rendered and engagingly told. The Amazing Snowman Duel would be a fun addition to any library or bookshelf.