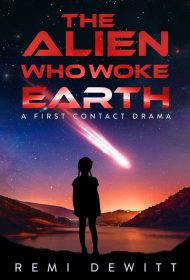 A child’s unremarkable act of rebellion launches an extraordinary series of events in Remi DeWitt’s novel The Alien Who Woke Earth, a story that incorporates elements of science fiction, horror and political commentary in a brisk package.

Devon is unhappy with the present she’s received from her parents for her seventh birthday, so she flees her own party to wander along a lakeside and reflect on the world’s unfairness. Her walk brings her face-to-face with a monster, a creature with a “big silver egg of a head having no eyes or mouth, or nose, or anything at all really” that emerges from the middle of the lake. Instead of running away in terror, Devon sees the creature as a gift from God, the kind of proper birthday gift her parents couldn’t give her. She calls the creature Auntie, and it quickly becomes a close—and lethal—friend.

Auntie, it turns out, has the power to make people disappear, an ability first revealed after it shoots red fireballs from its hands and does away with Devon’s parents. Devon isn’t disturbed; she begins an odyssey with Auntie that quickly builds up a high casualty count as the pair eventually travel to Washington, D.C. to confront the powers-that-be.

The author filters the extraordinary violence of Devon’s companion through Devon’s intriguing seven-year-old perspective, turning it into a divine kind of retribution she has to harness. Adding further interest, DeWitt details arguments between different factions who view Auntie’s powers in varying ways. For example, a college protester, CIA agent and reporter heatedly debate the meaning of power and the ethics of violence in pursuit of equality, prompted by the presence of Auntie and her powers.

Thanks to DeWitt’s skill for capturing the perspective of his protagonist, the journey is consummately entertaining. As Devon and Auntie reach the highest halls of American power, the story reads like a horror allegory, delivering plenty of deliciously unsettling moments and eerie sequences along the way.