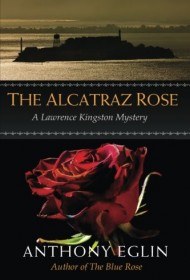 Well-mannered Englishman Lawrence Kingston just can’t resist solving a perplexing puzzle, whether in the newspaper crosswords or in life. Anthony Elgin brings back the popular botanist, professor, and amateur sleuth in this intricate and satisfying murder mystery. The Alcatraz Rose, the latest in Eglin’s garden mystery series, sets Kingston on two seemingly separate cases, though his irrepressible curiosity drives him to dig a little deeper to see if they are somehow connected.

Supposedly retired from his amateur detective role after some harrowing episodes, Kingston can’t turn away when 13-year-old Letty approaches him about her mother’s disappearance. The case seems straightforward enough; Kingston will just make sure the police have done all they can and give Letty a sense of closure.

It’s rarely so simple in Kingston’s world, however. The same day he meets Letty, he learns of the improbable appearance of a rare English rose on the island of Alcatraz, five thousand miles away. When memories from Letty’s past link her to Belmaris castle, the very home of the fabled Belmaris rose, Kingston can’t help but wonder if the two cases could be related.

While at times Elgin seems to be reaching a bit for the connections, the gentlemanly approach of Kingston and his compatriots lets Elgin lay out the details at a steady pace, so the complexity is not overwhelming — until, that is, the whirlwind scenes near the end, where Elgin expertly turns the tension up a notch with heart-stopping car chases and daring escape attempts.

All along the way, Elgin, an avid gardener himself, lovingly describes gardens of all sorts, from lush castle courtyards to the abandoned plantings of Alcatraz. He skillfully weaves together high-intensity intrigue with a luxurious setting, alternating between safety and danger right up to the last moment, where the truth is at last revealed. Readers looking for an intellectual mystery, with just a touch of cozy, will enjoy putting every last puzzle piece in its place.