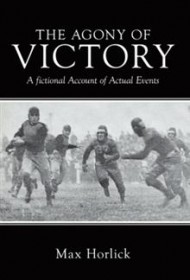 Broadly and ruthlessly satirizing academic institutions in general, as well as faculty politics, college football, educational priorities and a whole host of related issues in particular, this fast paced, funny novel will appeal to anyone who has ever been caught up in the tangled underbrush of higher education.

Sometime in the 1930s, Lagado University in a town called Balnibari (neither name having anything to do with Gulliver’s Travels) is in tough shape, more because of the 0-18 record of its football team than for anything to do with education. The school’s recovery from that disaster is told in episodic vignettes set in various classrooms and practice fields, in committee meetings, at an off-campus eatery known as the Corner Greek’s and in frat houses running the gamut from Alpha Alpha to Omega Omega.

Populating these sites are faculty members with names such as Athos, Porthos, John Maynerd Paynes (economics), the deans Nebbich, Kvetch and Agnes Day, as well as such students as Kavorkian, Tenorio and one Mme. La Farge, who is briefly glimpsed knitting by a classroom window.

Demonstrating the rigorous nature of academics at Lagado, some students searching for majors are advised by department heads that pursuing certain scientific careers (biochemistry for one) is pointless since pretty much everything that could be discovered had already been discovered.

The satire here is sometimes overly broad, as when the college hosts a scholarly group known by the acronym MERDE. But at other times it is sharp and pointed, though a bit obscure (fully appreciating it may take a certain familiarity with culture, history and literature). The novel’s real appeal, however, will be to those who know the world of academia. Those readers will delight in the author’s eye-winking satire that illuminates the truths of this culture and inspired the apt subtitle: “A fictional [sic] Account of Actual Events.”