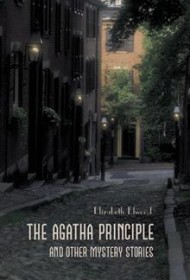 Elizabeth Elwood’s fourth collection of accomplished mystery stories reacquaints readers with the entertaining Beary family of Vancouver, British Columbia. There’s Philippa, a singer and actress, whose sleuthing and snooping play a major role in corralling the wrongdoers in several tales.

There’s also Richard, Philippa’s brother and a Royal Canadian Mounted Police detective inspector. Richard must thwart a terrorist attack at the Olympic Village during the 2010 Winter Games in “The Man in the Cage.” He’s also the investigator in “The Mystery of the Christmas Train,” a delightful tale about a cantankerous doyenne who accuses her troublemaker grandson of stealing her $10,000 necklace.

A second sister named Sylvia and her husband, Norton, are both lawyers and appear in “The Defence Rests,” a brief, yet satisfying narrative in which a vacation day turns grisly when Norton discovers a dead woman on their friends’ property.

Finally, there’s their overbearing, yet well-meaning mother, Edwina, and their spirited, long-suffering father, Bertram. In “The Tragedy at the Oaks,” the parents stumble upon a gravesite and notice that two people and a dog perished on the same date. They are determined to ascertain the curious circumstances of the deaths. The story is excellent for its historical recollection of pre-Civil War Southern life and its intrigue. Like his daughter Philippa, Bertram is a bit of a butt-in-ski–though less irritating–and he uses his gift of gab and perceptiveness to unmask “a rotten specimen of manhood” in the quasi-haunted house tale “The Window in Room 21.”

The Agatha Principle triumphs as an enjoyable assortment of whodunits written in lively, succinct prose. Its characters are likeable and authentic. Readers will cheer on the sputtering romance between Philippa and Detective Constable Robert Miller and will recognize Elwood’s spot-on portrayal of Edwina and Bertram as a bickering, though loving, long-married couple. Elwood is a gifted mystery writer, and the book showcases her mastery of the genre.