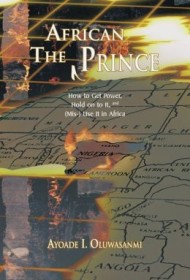 Born of grievance and frustration, this mildly satirical novel by a Nigerian lawyer chronicles the introduction of a young naif to the ruthless, cynical ways of West African political power.

Otileti Gbankogboju has just been chosen by the retreating British rulers of his unnamed, oil-rich island nation off the coast of Africa as its first prime minister. Never mind that Oti has no qualifications.

What to do? How to learn the ropes? Armed with the knowledge that his native Nigeria is, as he states in a preface, a “basket case” and a “failed state” rife with corruption, author Ayoade I. Oluwasanmi flies his innocent hero there to be tutored by a fictional Nigerian dictator called Chief Chukwuma Ezeani. An apparent compendium of Mugabi, Mobutu, Amin and the succession of tyrants that ruled “The Giant of Africa” (current Nigerian population: 200 million) for 50 years, the fat, grinning, high-living “Chief” is happy to indoctrinate Oti. He’s untroubled by conscience or qualm.

Will Oti be seduced by Nigerian nepotism, vote-rigging, tribalism, bribery, violence and greed? That moral decision is complicated by Oti’s red-haired, green-eyed wife, Phoebe, who confounds the locals while counseling her loving husband.

Oluwasanmi’s prose lacks the ironic bite of true satire, and the Chief often sounds too candid to be cunning (he’s more like a mere mouthpiece of evil), but The African Prince (an apparent nod to Machiavelli) deftly exposes the brutal excesses of Third World politics in the great tradition of muckraking fiction.

That’s no small thing in a volatile society. In 1995, the well-known Nigerian novelist Ken Saro-Wiwa was executed by the regime of General Sani Abacha, who ruled for five years. Abacha’s another obvious model for this eye-opening book’s smiling villain.