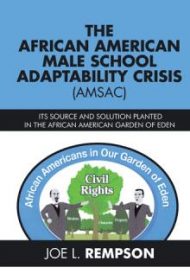 Joe L. Rempson is certainly not the first to claim that rather than blaming the past for what has happened, African Americans must look to shortcomings within their own culture to solve problems within their community. In this hefty offering, he particularly addresses the long-reaching deleterious effects certain events and attitudes are still having on young African-American men.

The author posits early on that only 20% of what he calls “adaptability” issues are a direct result of insufficiencies within the school systems and that we must search deeper to find the real roots of the problem to arrive at viable solutions. So while some of the book’s content addresses school issues, most of it concerns itself with the latter.

There are no euphemisms here. Rempson’s terminology is direct and to the point: He notes that the community’s “first bondage” was slavery, the “second bondage,” victimology. He cites three major “demons”: fatherless families, IQ lag, and crime. He calls for African Americans to “throw off the racism security blanket” and to try to “think white,” especially concerning the challenge of success in the educational environment.

At more than 900 pages, this book is initially daunting. But the narrative is so tidily laid out that, in the end, none of the content seems superfluous. Rempson’s arguments are balanced with references to and extracts from plans proposed by noted historical figures such as William Lloyd Garrison, Booker T. Washington, and Martin Luther King Jr., as well as studies from notable modern sociologists and psychologists, and more. Admittedly not a sociologist, psychologist, or historian, Rempson describes himself simply as an educator, and while some of his arguments are not revelations, others are. For example, he provides a unique angle on Dr. King’s attitude on self-reliance, and draws an interesting connection between King and Washington that many would consider startling. His insight on this and other topics proves particularly enlightening and stimulating.

Rempson writes from the heart, but with purpose and clarity. In these days well beyond the beginnings of the struggle for equal rights for African-American citizens, and including some unfortunate backlash from the same, Rempson’s is a fresh voice that deserves to be heard.