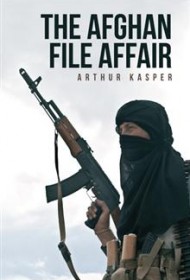 Arthur Kasper offers an overstuffed espionage thriller in this tale set in the mid-1980s.

Natalia, a CIA operative at the U.S. Consulate in Florence, is kidnapped by Italian Mafiosi hired by Arab terrorists who want to use her to obtain a secreted film of the “Afghan File.” The file identifies Arab terrorists trained in East Germany and members of the East and West German governments who trained them. The Mafiosi will receive several million Euros in drugs for the film.

There’s a good yarn in here, no doubt, but it’s buried in overcomplicated subplots and a surfeit of minor characters, details and side stories. The narrative includes Syrian, Egyptian and Iraqi terrorists, neo-Nazis, Italian and American Mafiosi, East and West Germans, the CIA, KGB and Mossad, a corrupt Vatican priest. There’s an American MP tracking the Mafiosi’s drug smuggling route through an American military base in Italy and Arabs trying to buy a dozen “krytons” from a Russian middleman in Paris so Saddam Hussein can build a super-cannon, fire nuclear shells at Israel, unite the Arab world, and install Sharia law in the U.S. by unleashing the sleeper cells identified in the Afghan File. Everyone is chasing everyone.

Due to the novel’s complexity and sheer number of characters (many who only appear once), readers will often feel awash in this story. Unnecessary detail often bogs down the narrative, and the tale fails to maintain tension and sustain reader interest throughout.

A keen-eyed editor could eliminate a large chunk of text, greatly improve the story’s pace, substance, and intensity, and turn this complicated jumble of spy versus spy into an entertaining tale. As is, many will find it a challenging read.