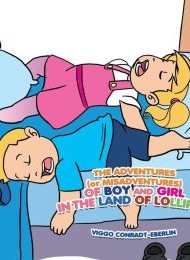 Children are introduced to a strange, imaginative world in Viggo Conradt-Eberlin’s picture book The Adventures (or Misadventures) of Boy and Girl in the Land of Lollipop.

As the story begins, the two unnamed leads in the story, along with their friend, a pink polka dotted dragon, look to fill their day together. After a digression about giant spiders (or “Piders,” as they’re called in the book), the kids undertake a game of naming birds. When they happen upon a policeman, they ask for directions to the Land of Lollipop. The policeman directs them to a motel, where they check in, have some milk and cookies, and go to bed. This is where the story ends.

As indicated by that summary, the story is meandering to the point of puzzling. Conradt-Eberlin’s style of storytelling is casual and fun, but noncommittal: The book begins with the line “How young are they? I guess you would say young,” describing the children, and the dragon is described as “[…]I guess, a boy dragon named Pinky.” The author may have been trying to simulate the effect of a parent spontaneously making up a story for his children as he sits with them at bedtime, but this makes the plot seem dashed-off, rather than well-considered. Full of parenthetical notes and asides (including directing children to check under the bed for those aforementioned “Giant Piders” — advice bound to terrify younger readers), the book seems fueled by tangents. The result is a tale that jumps around without much rhyme or reason.

With illustrations that are bright, colorful and appealing, the book ends with a promise to continue the story “tomorrow.” Ultimately, readers might do best to use their own imaginations to fuel ideas as to how the story should continue.