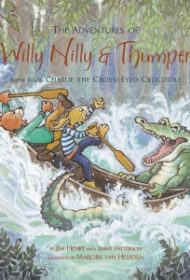 In the fourth picture book in the Willy Nilly and Thumper picture book series by Jim Henry and Jimmy Patterson, the titular characters go on a canoe trip only to meet up with a ferocious beast.

One day, adventure-loving friends, Willy Nilly, a dog, and Thumper, a rabbit, set out on the San Juan River in “Carefree,” their canoe. But then, an unfamiliar creek beckons the two explorers. Watching from a branch above them are Pete and Sam, two hungry vultures who are happily anticipating dinner; they see that the unsuspecting duo are headed straight toward Charlie, the infamous and mean, cross-eyed crocodile.

Thumper spies what he thinks is a log in the water, but Willy Nilly quickly realizes that once again it’s Charlie, who has relentlessly pursued them in the past. They swim to shore and dash up a tree. But that’s far from the end of their travails as Charlie tries to outsmart them using several ploys.

Of course, Willy Nilly and Thumper eventually escape Charlie’s jaws and no one gets eaten. The final scene shows the friends sitting down to a spaghetti dinner, ruminating about their harrowing adventure and gleefully anticipating another.

In addition to learning a sweet lesson about teamwork and friendship, readers will be delighted by the protagonists’ many white-knuckle close calls. Margorie Van Heerden’s charming illustrations are soft, colorful and fluid, with humorous details and expressive characters, and the overall presentation is flawless. A terrific addition to the book are illustrated pictures and information about rivers and wetlands, the history of canoes, and the evolution and characteristics of crocodiles. And the author’s note about how his father inspired the story further enhances the book’s appeal.

Henry, Patterson, and Van Heerden make a marvelous team, and without a doubt, young readers will be eagerly awaiting book five.