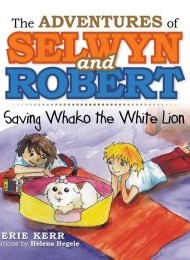 Valerie Kerr has taken stories originally written for her young nephews and adapted them into the children’s book The Adventures of Selwyn and Robert: Saving Whako the White Lion, the second in the Selwyn and Robert series.

In this story, Selwyn and Robert are asked by their pixie friends to travel to South Africa to save Whako from harm. Whako is a rare white lion who has been “chosen to help people to change” and who will help “distribute the harmony that is needed to change people.” It may seem a bit of a stretch to send two young boys to foil an armed hunter, but, using their special powers to influence their surroundings, Selwyn and Robert are able to rescue Whako and teach the hunter to better appreciate nature.

The book seems to assume that readers have read, and fully recall, the previous Selwyn and Robert book. It would have been easy enough to include a brief recap of those events, but instead, the story begins with the boys waiting for news of a dog, whom they will later adopt. The dog is at the vet’s office, but there’s never any mention of how it got there or what’s wrong with it. There are statements such as, “Selwyn and Robert did not forget the secret that they learned on the farm” (a reference to the first Selwyn and Robert book) but with no further explanation provided, it’s a recipe for confusion for new readers.

The illustrations are engaging, with a slight anime influence, but they could be better coordinated with the text, particularly during the boys’ encounter with the hunter.

Kerr has also included a song, “Whako the White Lion Cub,” in full musical notation, at the end of the book. It’s a nice touch, and the perfect cap for a quirky and unique, if uneven, children’s book.