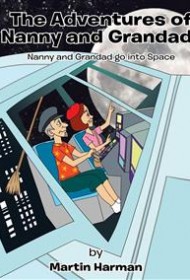 Most children are fascinated with space; they also tend to love their grandparents. Those two affinities don’t often overlap, but they merge in this children’s picture book, in which a pair of retired grandparents find themselves in orbit around Earth.

The grandparents, interested in seeing a shuttle launch before they end their vacation in Florida, are scrounging for tickets when they’re given a tip, and pointed in the direction of a Spanish-speaking man. Through a misunderstanding, they are driven to Cape Canaveral and given mops and brooms, along with orders to clean the inside of the shuttle. Once inside, they accidentally launch the shuttle, and rocket into space before safely guiding the shuttle back down to land.

Martin Harman’s story, one of a series of Nanny and Grandad’s adventures, is original and offers many fun moments, such as the confused exchange between the Spanish-speaking cleaning service worker and Nanny and Grandad. To be sure, Harman stretches the limits of credibility. Clearly, such a chain of events would be impossible with the strict security surrounding a shuttle launch, and Grandad’s landing of the shuttle by simply pulling a few levers, is equally outlandish. Still, the tone is tongue-in-cheek, and children aren’t likely to be bothered by such things.

The book’s shortcomings lay in its editing, including a lack of commas to set off quotes, as in: ” ‘Don’t worry’ [sic] said Grandad, ‘I think I may have worked this out. Look this lever does this’ [sic] and he pulled a lever a little way back.” There’s also an inconsistent use of American and British spellings: “Chequered” and “checkered” are both used to describe a man’s shirt. Finally, the pages are text-heavy, with some two-page spreads completely devoid of art.

These issues don’t spoil the enjoyment of the story, however. Combined with bold illustrations throughout, the book offers a unique, often amusing diversion.