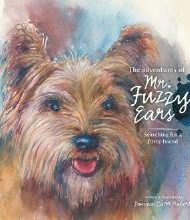 The Adventures of Mr. Fuzzy Ears tells the story of a small dog looking for a friend. Colorful, impressionistic paintings enrich the approachable text.

Mr. Fuzzy Ears is an easygoing dog in a happy home, but he yearns for an animal friend. As he searches his home and yard for one, he learns that the mouse and chipmunk are too shy to play, and the squirrel won’t come down from the tree. After telling his human owners he wants a friend, they bring him to the local Humane Society, where he meets a cat, rat, and rabbit—none of whom are quite right for their family.

Finally, he meets a dog named Izzy and learns that she and another dog, Sophie, were rescued from what seems to be a puppy mill. Mr. Fuzzy Ears and his parents decide to adopt both dogs. On the way home, they find a wandering puppy that they eventually adopt as well, further expanding the family.

Inspired by the author’s own four dogs, this story makes the case for pet adoption and Humane Society support while reminding readers that pets are an important responsibility and should only be adopted by those who will attentively care for them.

The story is unfortunately marred by poor character development. The creatures Mr. Fuzzy Ears encounters are all depicted as pleasant and polite, bringing a sameness to their interactions with him. The story would be enriched by showing how different personalities can impact a friendship; for example, if one played too aggressively or if another were too much of a homebody. As is, young readers learn little about what Mr. Fuzzy Ears actually wants in a friend, let alone the qualities that make for a healthy, mutual friendship.

That said, the narrative is upbeat, easy to read, and beautifully captured in soft, full-page illustrations. While revisions could improve The Adventures of Mr. Fuzzy Ears, it ultimately delivers an appealing story for animal lovers.