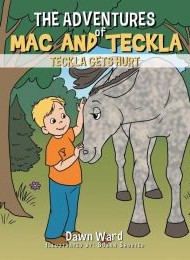 Based on real characters and the actual recovery of a family’s mule from a life-threatening injury, Dawn Ward’s The Adventures of Mac and Teckla: Teckla Gets Hurt is a picture book that delivers several worthy messages.

First, it tells of the sheer fun of animal companionship as a boy called Mac and his mule, Teckla, run through the desert, splash through rivers, perform in the rodeo and more. Teckla is careful to take Mac down safe paths and protect him from bears. But when Teckla is hurt (the story doesn’t specify what the injury was), it’s Mac’s turn to take care of Teckla. As he cleans Teckla’s stall and changes her bandages, Mac shows that a responsible and nurturing child can make a difference when an animal is in trouble.

Finally, the story depicts how the smaller pleasures the pair finds after Teckla’s injury, such as gazing dreamily at the clouds, can still feel like adventure.

Susan Shorter’s lively, bright illustrations enhance the narrative, but also serve to underscore a minor question the story raises: Where is there a place in which desert, mountains, rivers and a deciduous-looking forest full of bears are all in easy reach of a boy and his mule? Additionally, Mac’s size in proportion to the mule seems to change in various illustrations.

The prose is straightforward and easy to follow, though a thorough copy edit would have corrected a few punctuation errors, such as a missing period (particularly noticeable with the large font used) and the repeated misuse of the word “everyday” when “every day” is needed. A more specific depiction of mood – such as pinpointing if Mac is sad or worried rather than “upset” that Teckla is hurt – would also enhance this work.

Despite these issues, the positive messages — and the more original use of a mule instead of the relatively common horse in picture books — make this a solid read-aloud choice for young boys and girls.