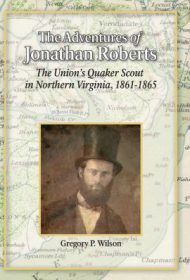 When New Jersey Quaker Jonathan Roberts relocated to Fairfax County Virginia in the 1840s as part of a colony dedicated to showing landowners the profitability of farming without slaves, little did he know that his pacifist and abolitionist beliefs would lead to political activism and personal sacrifice.

In this meticulously researched historical biography set during the Civil War in Fairfax— a hotbed of extreme political division under Union control until 1862— Gregory P. Wilson paints an interesting portrait of Roberts as he responds to the emerging sociopolitical chaos of secession and becomes a noted “incendiary” hunted by neighbors, local authorities, and Confederate general P.G.T. Beauregard.

This is Wilson’s second book on Roberts (who is his great-great grandfather), and it features new evidence gathered from public meetings, entries in Roberts’ journal describing the fight against the vote for secession, and court records. Here, Wilson also focuses on Roberts’ role in the Union Accotink Home Guard— one of the war’s first racially integrated national guard units that skirmished with rebels who raided the county.

Roberts’ outspoken anti-slavery principles and unswerving beliefs made him a marked man. As a non-combatant Union scout and twice-elected sheriff of the county, his well-known anti-slavery stance led to numerous attempts by rebel authorities to arrest and hang him, but thanks to a slave’s warning, Roberts evaded the lynch mob.

Other colorful adventures include dispatching messages at Second Manassas/Bull Run; suffering serious injuries while chasing Confederate Colonel John Singleton Mosby, whose raiding bands stole army wagons, horses and slaves; struggling with the challenges of carrying out racist laws as county sheriff, and his continued efforts fighting injustice after the war.

Wilson’s narrative, highly detailed and replete with footnotes, makes for a scholarly, often slow-going narrative. While it may not captivate general readers, this well-documented portrait of Roberts’ tenacity and conviction during a time of upheaval will impress Civil War buffs, local historians, and scholars of historical biography.