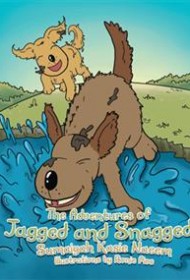 A pair of puppy pals are the subject of Sumaiyah Kasie Naeem’s picture book The Adventures of Jagged and Snagged. The book contains two short stories in which the dogs explore their surroundings and learn about life: the title story, and “Jagged and Snagged’s Bath Day.”

In the first story, Jagged and Snagged find a bone that neither is able to chew, and they become the happy recipients of meat scraps from a restaurant, instead. In the second story, with their dirty and matted coats itching, the dogs are advised by a friendly bird to take a bath. After doing so, they feel better and, the story tells us, “now bathe everyday.”

Naeem’s characters are cute and distinctive, brought to life by Pios’s lively illustrations. The book seems targeted to very young children (who may not yet have learned basic lessons like the importance of bathing).

There are, however, several problems. Naeem attempts to make the stories more child-friendly by writing in rhyming verse. Unfortunately, those verses often run too long, or don’t match up with their antecedents in syllable count, which spoils the sense of rhythm. For example, there are syllable counts of 13 and 15 in the lines: “After splashing and playing, both began to feel well. /They had fun and were no longer itchy or had a bad smell.”

In addition, the book is hampered by writing mechanics: a confusing section where the same dog speaks and replies, for example, and the use of “they’re” instead of “their.”

But the overriding challenge is the plots of each of the stories, which lack excitement; the dogs’ problems of being hungry and dirty are resolved before there’s any real sense of difficulty or achievement. While the main appeal of this book is its simplicity, this also ends up being its weakness. Young children might appreciate the cute illustrations, but the stories seem too thin to engage an audience in repeated readings.