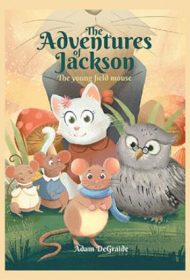 In this picture book, a young, lost mouse must ask for help.

As this story begins, Jackson, a field mouse with a dashing blue scarf, finds himself lost. He knows his parents are with his Uncle Nester in a far-off castle, but he has no idea where that is.

To find the way, he talks to four animals, two of them (a cat and owl) particularly partial to eating field mice. Jackson doesn’t show fear, however, and all the animals he encounters are nice, even if most can’t offer much help. Finally, Jackson reaches the castle and, thanks to his bravery, his uncle names him as his heir: “…I’m going to make you a prince and future ruler of this castle,” Uncle Nester announces.

The story never explains how Jackson became lost, why he doesn’t know the way to the castle, or whether anyone was supposed to be watching him in his parents’ absence. These are significant oversights, since they would have provided more context for Jackson’s adventure and possibly supported his character development.

Additionally, Jackson doesn’t grow and transform through his journey. For example, despite his uncle’s proclamation, he doesn’t become courageous, as there’s little indication he’s afraid of the strangers he meets (even those who might eat him) in the first place. He has no qualms about hopping on a whale’s back to cross the ocean; he’s polite and grateful to every animal he encounters, and he never loses hope.

The illustrations are colorful, detailed, and immersive, and are the saving grace of a straightforward, slightly bland story with a protagonist who doesn’t seem to struggle much. Additionally, the story’s large print, approachable word choice and conversational style make this engaging for young readers.

However, the book is loose with punctuation, often forgetting quotation marks, among other lapses.

This is a workmanlike tale of a mouse trying to find his family. It offers limited surprises, but is enhanced by lovely, enjoyable illustrations.