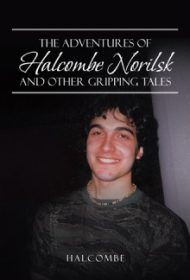 The Adventures of Halcombe Norilsk and Other Gripping Tales is a collection of incongruent essays preceded by a short section that appears to be a largely fictionalized account of the author’s life to date.

Making sense of this publication can be challenging. The book is credited to “Halcombe,” who (per the author’s bio) is “both the author and the protagonist of this book” but also “the pseudonym of Spanish writer Alberto Gonzalo.” Meanwhile, the book description notes that the protagonist Halcombe is from Russia.

The opening section comprises eight chapters in which Halcombe Norilsk unsuccessfully attempts to become a journalist, model, politician and lawyer. This section is written in third person and includes a broad variety of what seem to be fantastical elements. For example, the narrator refers to Halcombe “doing time in prison” due to a civil suit in London, later committing a “$100 million jewelry heist” in New York City, and subsequently being mistaken for a “wanted rapist.”

Were the book to continue in that fashion, one might presume the writer intended some type of Kurt Vonnegut-style postmodern satire. However, those 20 pages are followed by 146 more in a section titled “And Other Gripping Tales.” Rather than tales, they are brief, wildly varied essays. There are pop-culture analyses such as “Best 30 Songs of Jack White” and “Incredible Origins of Metallica,” an essay about deaf people, a two-page report on taking the “Game of Thrones” tour in a Croatian city, the author’s thoughts on Brazilian football player Carlos Henrique Raposo and more.

The author doesn’t lack for enthusiasm, and he displays some wit, such as noting that sugar is “a horrible companion to be friends with.” But the text is marred by ungrammatical prose typical of a non-native English speaker (“it looks like as if…”; “All this kind of prizes,” etc.).

Ultimately, this offering requires revision with an eye for greater coherence in order to appeal to a wide audience.