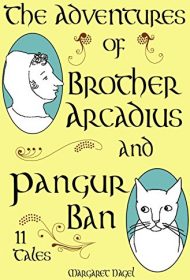 Margaret Nagel delivers a likeable, funny and, above all, believable protagonist in this delightful story brimming with captivating characters.

The year is 898 AD. Sixteen-year-old Brother Arcadius, proficient in Latin and Irish and passing fair in Greek and Hebrew, has outgrown the small abbey in Dublin where his widowed mother placed him, feeling that he was too smart and frail to work in the family brick-making business. He sets off on the arduous and dangerous journey by boat and overland to become assistant librarian at Spiritus Sanctus, a much larger monastery housing 150 brothers and over 500 books, near the northern border of Italy.

Between bouts of seasickness, the humble monk uses some of his limited “pieces of money” to ransom a kitten that a sailor is about to kill. Arcadius names the sooty cat Pangur Ban, Irish for “white,” the color under the soot, and sets the scene for 11 charming tales recounting how a naive young apprentice librarian and an intuitive and “magical” feline influence the lives of the clergy, a noble family, an accused witch, murderers and thieves, and various other travelers.

Nagel’s prose is crisp and spare, and her word choice facilitates the claim that the book “is written for readers from 12 to 112.” While she explains in an addendum titled “An Apology to Actuality” that the story mixes historical fact and fiction, the author paints a lively picture of the times through the actions of myriad characters and situations. (The addendum also notes that Pangur Ban originates from a poem a ninth-century monk wrote about his cat.)

Nagel, who drew the book’s appealing illustrations, offers enough information so that each story can be read separately, but the clever author has arranged them in chronological order, so that they work even better as an episodic novel.

Thankfully, Brother Arcadius is only 20 at the end of the book’s final tale. Even though life spans were short in the 10th century that should leave time for many more adventures in what is sure to be a much-anticipated sequel.