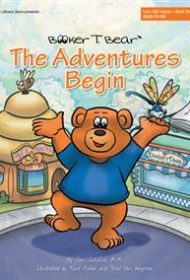 Booker T. Bear: The Adventure Begins is the first title in a planned series of picture books featuring the titular character.

Booker is a young bear whose grandfather loves to travel. Inspired by his tales of adventure, Booker uses an inherited “imagination jacket”—he calls it the “Jet-Away jacket”— to travel to Sicily. Through this conceit, the book presents Sicily through concrete details that will appeal to young readers. Booker and his dragonfly friend are introduced to the local flowers and various buildings and landmarks, and they experience the eruption of Mt. Etna. Booker has a wonderful time and returns home, ready to take on new adventures.

Unfortunately, the story is slow to get going. The adventure doesn’t start until page 20 because so much time is spent introducing characters, describing Booker’s hometown, and following a subplot about Booker temporarily misplacing his jacket. One hopes that future books in the series will avoid this by diving into the heart of the story more quickly.

The book’s greatest flaw is its treatment of complex vocabulary. It not only uses big words, but overcomplicates their presentation by setting them in capitals and including unnecessary hyphens—for example, “PRIS-SI-EST” and “STU-PEN-DOUS.” This treatment is likely to further confuse early readers, especially since the technique is deployed inconsistently. It would be better to use age-appropriate vocabulary and trust young readers to tackle new words without the additional fanfare.

At story’s end, a short glossary, further information about a type of volcanic rock found in Sicily called “tuff,” and a recipe for pizza help elevate the book (although the pizza recipe uses tortillas instead of dough, which is sure to aggravate many Italians).

Booker T. Bear: The Adventure Begins is a promising but imperfect start to a new series. While it makes world travel accessible and fun, it would benefit from a streamlined plot and simplified vocabulary. Nonetheless, readers interested in world travel should stay tuned for future titles.