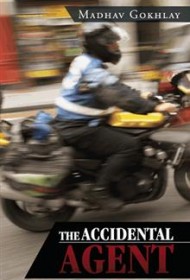 Author Madhav Gokhlay opens his story by laying the foundations for a trope in spy fiction: his hero is a novice spy without the skills needed to survive when a mission goes south. And, of course, it does go very wrong.

Sid Joshi is a young computer programmer who gets steered toward a career in the CIA by his favorite professor. Idealistic and innocent, Sid is only halfway through his training year when a low level assignment, which, because of his profile as a computer nerd and Indian-American, gets him pulled from training and sent to the epicenter of the high-tech industry in Pune, India.

Sid’s work in cyber-security has nothing to do with the machinations of international conspirators, who are attempting to manipulate political and economic areas of the Near East, but he is soon drawn into work beyond his skill level. Suffice it to say that murder and dirty bombs are not something he expected to be dealing with so early in his career.

The author knows the business side of high-tech. He also knows India and the historical conflicts in the area. It is unfortunate that he hasn’t thoroughly edited his work. Replete with missing definite and indefinite articles such as “the” and “a” on nearly every page, the story is a challenge to read. There are also coincidences that go so far beyond believable as to be plot killers, such as when Sid’s girlfriend unexpectedly flies to India and runs into him within hours in a hotel. Or that she has just happened to take a job at the firm that is involved in the treachery.

Some suspension of belief is necessary in fiction, but there is a pact between reader and writer that promises a bit of believability. Gokhlay has the knowledge to tell a story. Now he needs to work on his craft.