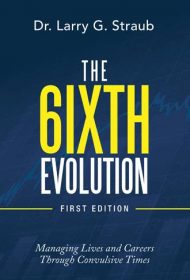 A perfect storm of globalism, “the widespread use of debt and leverage,” technological innovation, and the “imperfect governmental structures and systems” in the U.S. and elsewhere have created, according to Larry Straub in The 6ixth Evolution, “economic and societal complexities like never before.” These complexities require a new approach to career pathways and economic stability, he posits.

Straub, who holds a doctorate from Case Western Reserve University, analyzes the convulsive and destabilizing factors in our “generational landscapes” and provides a multi-step method for career development and financial solidity.

Straub divides his book into four parts. The first describes historical factors like globalization, immigration and technical sophistication that impact an individual’s maintenance of a career. The second expands on societal and historical problems in relation to career pathway instabilities. The third describes the author’s research and metaphorically (build a better boat) encourages readers to develop new, sustainable career strategies. The fourth recommends specific strategies for developing a successful career.

Instead of presenting innovative strategies to match the volatile times he describes, however, Straub’s suggestions mainly follow the dictates of common sense, covering familiar topics like networking, using financial management tools (such as budgets), and “continued learning and skill development as it relates to career success and sustainability.”

Straub supplements his analyses and recommendations with the story of his own family’s business, and interviews with people to provide “real-world” examples. Although they illustrate his points, the interviews are strangely similar in tone and, disappointedly, lack the kind of details that would make the interviewees seem real.

Also, although his analyses of the contributing factors to economic recessions or convulsions are well documented with footnotes, his prose is predominantly abstract. For instance, he states that many countries are “inept at managing growing debt levels,” but doesn’t say which countries or describe their failures.

While the book falls short of its own premise, readers transitioning to a new career may find it a useful thought-organizing tool.