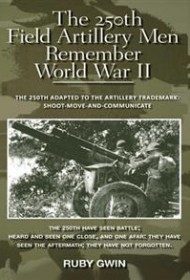 Ruby Gwin’s book comprises a collection of essays by and about the men in the 250th Field Artillery, a battalion chosen by Gen. George S. Patton to serve with him in World War II. While at first glance it might seem to be primarily of interest to military buffs and the soldiers’ families, these narratives speak to much more than war and military assignments. These 38 tales — largely personal narratives — are memories of courage, loss and endurance, as well as recollections of kindness and even mischief, told with unexpected humor.

Events are frequently repeated, but a changing point of view helps keep each tale fresh, and as the stories accumulate, the reader gains a sense of familiarity as well as a curiosity for how each particular soldier will react.

Emotions also are repeated: the frustration of waiting to land at Normandy because of rough waters; the horror of Dachau; the disappointment of not being permitted to join the French in liberating Paris; the constant fear that is a wartime fact of daily life.

“The smell of death was overwhelming,” writes Joe Festervan, an artillery gunner. “ … There was much that our troops experienced — memories of burned comrades. It really would bother me to see our tanks on fire with four to five men. Once, a mortar shell fell in a direct hit in a foxhole, leaving only shredded human flesh. You’d see fighter planes that had been shot down with its pilot’s skeleton still in the seat of the plane — war is not pleasant!”

In assembling these essays, Gwin has created a collective memoir that offers an honest, personal look at war, told from the perspective of decades later. Field Artillery Men honors the men who fought in this battalion and preserves an important piece of history.