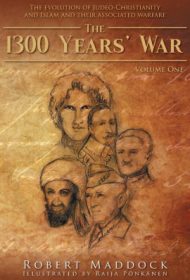 In the introduction to The 1300 Year’s War, author Robert Maddock states: “This volume makes comparisons between Christianity and Islam and follow [sic] their historical evolution and the wars between them.” Thus, one would expect a historical narrative outlining the religious wars between Muslims and Christians, with doctrinal backgrounds in both faiths. Most of this text, however, is dedicated to critiquing Islam and Muslims.

The bulk of the book (about two-thirds) focuses on Muslim history and Islamic doctrine, promoting many misconceptions. For example, the author claims that “The Koran advocates destruction of unbelievers, infidels and Islamic backsliders. They will not quit until Sharia law governs the entire world”; however, only a small fraction of Muslims read the Koran this way. A discussion on Paradise repeats the fanciful notion of virgins awaiting Muslim men, an idea at odds with mainstream Muslim belief from pre-classical to contemporary times.

The author also notes that according to the Koran, women have “half the value of men” without including important historical context: Most historians believe that giving women even partial rights in 7th century Arabia was progressive, especially given that American women were not formally allowed to vote until the early 20th century.

Maddock includes only one chapter on Christianity and Judaism, and some chapters (such as those on development of warfare, modern economics, brain science, and the Vikings) seem opaque to the narrative’s objectives.

The author’s claims are backed up by problematic sources. References from Arab historian Ibn Ishaq are misquoted, and the translation is not cited. Other references (e.g. Huntington) have been widely debunked by academicians. Tracing Maddock’s web sources leads generally to pages no longer uploaded. Most of his available Wikipedia references caution readers of the lack of validation and the need for additional citations.

Futhermore, the author uses George Sale’s 1734 translation of the Koran (the current academic standard is Arberry’s 1955 translation); Sale writes in his introduction that Islam is a false religion. Other translations (e.g. Answering Islam) stem from organizations that promote converting Muslims into Christians.

Given such issues, readers interested in exploring Muslim beliefs and practices will do best to seek out other volumes, such as Andrew Rippin’s Muslims: Their Religious Beliefs and Practices (an academic standard now in its fifth edition) and Ali-Karamali’s Demystifying Shariah.