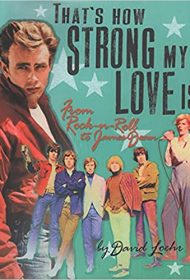 David Loehr’s That’s How Strong My Love Is is both a memoir and hagiography of growing up loving rock music and, later, the 1950s movie star James Dean.

The author grew up in western Massachusetts in the early 1960s, where he got hooked on AM Top 40 radio. By decade’s end, he was living in New York, on the fringes of the music, theater, art and gay community scene. He saw artists of all kinds, from the Rolling Stones to the Kinks, to Iggy Pop and even Ann-Margret.

Later, he also became enamored with James Dean and, with his fashion-designer partner, began hawking Dean’s image on T-shirts and postcards. By book’s end, Loehr enjoys a rising reputation as a James Dean expert and runs a James Dean museum in the late actor’s Indiana hometown.

Loehr remembers every act he ever saw, and seems to have every scrap of paper—ticket stubs, concert posters, publicity photos—he came across; the book has pages of photo collages between chapters.

Unfortunately, the narrative resembles his collages, delivering dizzying snippets of information rather than a focused, immersive portrait of the times. Loehr mentions stars he’s seen on stage, in clubs and elsewhere, and even lesser-known or now-forgotten people. It seems that no tidbit is too small to include: Writing about being part of David Bowie’s entourage during a Bowie visit in LA, the author notes: “One night after the show, [Bowie’s costume cleaner] brought David’s sweaty wardrobe back to the room. We passed the damp clothes around, and sniffed the sweaty socks before they went to the cleaners.” The name-dropping, albeit initially impressive, eventually becomes tedious.

The writing is crisp and clear throughout, although scattershot due to the short-attention-span spatter of celebrity names. Thankfully, by the end, Loehr writes with more focus on his experience as a gay man in small-town America, where he confronts homophobia.

While some might enjoy his music recollections, ultimately they don’t deliver much substance. Oddly enough, it’s Loehr’s insights into gay culture that make the book worth sticking with until the end.