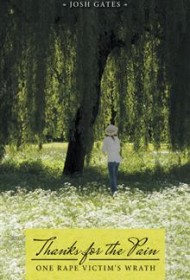 In this short work of fiction, a family must come to terms with hidden secrets, loss and pain.

Just before Scarlett turns 13, her mother abandons her and her father. Five years later, Scarlett’s mother has passed away and Scarlett is seeking answers to why her mother left so abruptly. Her father decides it’s time to share the family story and pulls out a scrapbook in which family members have written stories using allegories and metaphors to record their journeys. In one, for example, an unsold blanket leaves a shop hoping to find a new home. The blanket finds it when he takes pity on a runaway in an alley and covers her up. Scarlett adds her own story to the collection when she has a son. However, the novel soon shifts gears, abandoning the family stories to become a novel of rape and revenge.

When Scarlett becomes upset at one of the stories her father reads her, she goes for a walk and is sexually assaulted — a fleeting three-paragraph event that later drives the novel. The story shifts to a case study of Scarlett and her failed marriage to a young man who accidentally interrupted the assault – told through the “transcripts” of a therapist who is presenting the case study at a conference.

What began as a good idea – learning about a family through their short stories – soon loses its way. The short stories are clever, but the rest of the novel is convoluted, even obtuse, as the author shifts back and forth in time, introduces new characters obliquely and leads to a “surprise ending” that doesn’t add up. Events are often puzzling, and most readers will not want to work this hard at a novel for so little payoff.

Although Gates shines when it comes to the stories-within-the-story, he needs to sharpen his focus, choosing to concentrate on family stories or “one rape victim’s wrath” in order to create a credible novel.