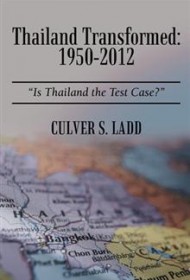 It is safe to say that Thailand and its history are largely unknown to the general reader. Yet it is also accurate to say that a nation so strategically located in Southeast Asia bears closer scrutiny. Culver S. Ladd’s book Thailand Transformed: 1950-2012 offers an opportunity to shed light on the 51st largest country in the world.

The reader learns of the author’s apprenticeship as a teacher in Thailand in the 1970s and his field research for companies seeking to expand into Southeast Asia. Along the way, Ladd becomes a participant in the economic transformation of Thailand, as his research aids in the development of badly needed hydropower capacity: the Yanhee Power Project. Without ignoring the often tragic consequences of various coups, constitutional crises and natural disasters, the underlying thesis of the book shares the view of Cold War observers who proponed a “domino theory” in the developing world. Like them, Ladd believes that recent progress in Thailand has created a bulwark against communist expansion in Southeast Asia, a bulwark that the United States would be well served to support.

While this book is heavy on statistics, Ladd can tell a good anecdote, such as his explanation of why Bangkok was a latecomer to mass transportation: religious and cultural mores slowed construction of a subway system because much of the population believed that once underground, they would be perilously close to the devil. Despite such advantages, however, Thailand Transformed is marred by its writing style. The book is poorly edited, replete with grammar, usage and spelling errors. If readers can get through these obstacles, they will find an interesting morality tale: in a term often used today, Ladd presents a Thailand that has become “too big to fail.”