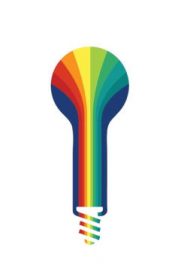 As author Ellis Oswalt notes in this book’s Introduction, many only recognize the name Tesla because of the automobile powered by the induction motor he invented. In Tesla’s Words: A Stunning Utopia of the Future, Oswalt unpacks this extraordinary prodigy—who invented the first wireless remote control, radio and much more— using the man’s autobiography.

Tesla’s autobiography, only six chapters long, was originally published in Electrical Experimenter Magazine. Oswalt likens the experience of reading it to reading Shakespeare: “It is literature from the past that cannot be understood at a glance.” To make it more accessible to a modern audience, Oswalt offers this simplified, adapted version, bolding direct quotes from the original.

The most well-known story recounted is Tesla’s dispute with Thomas Edison, who allegedly agreed to pay Tesla $50,000 to help his company reconstruct its machines. But Edison never came through with the money. “On completion of this task,” Tesla writes, “it turned out to be a practical joke. Edison never intended to pay me a cent more than my meager wages of eighteen dollars a week.”

The scientist discusses his groundbreaking development of the system of alternating electrical current and other inventions, as well as his predictions for a global wireless communications system – foreshadowing today’s information highway. Despite his amazing achievements, Tesla often struggled financially.

Oswalt maintains Tesla’s stream-of-consciousness writing style, which allows readers a peek into the genius’ complicated mental universe. Indeed, Tesla often suffered from visions and hallucinations. “On my return to the city that night,” he recounts of one episode, “I felt a positive sensation that my brain had caught fire. I saw a light as though a small sun was located in it and I passed the whole night applying cold compressions to my tortured head.”

Tesla’s Words offers a fascinating glimpse into a man whose extraordinary brain whirled with visionary ideas but who suffered for his genius in many ways. It will leave readers with a deeper appreciation for his important contributions to our daily lives.