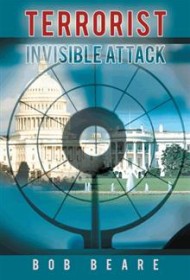 In the middle of the night in Prague, Americans Bill and Frances Barns are kidnapped by Al Qaeda terrorists and brought to Baghdad. The terrorists instruct the couple to carry out assignments for a plan to attack the United States. If the couple fails to cooperate, they will be killed along with family members and friends.

Both Bill and Frances have tracking device implants, so any chances of escape are virtually non-existent. The couple agrees to cooperate, traveling all over the globe organizing container shipments of weapons for Al Qaeda. In just three years, Bill and Frances succeed in accumulating millions of dollars, which are safely tucked away in Swiss bank accounts.

With bare-bones simplicity, author Bob Beare crafts a gripping thriller by putting one foot in front of the other, transporting the reader into the web of sinister terrorists. Eventually, the weary couple realizes that they must make their escape. By then, however, Al Qaeda and the Mafia begin to close in on them. Thus, the story’s pace accelerates to an exciting finish. But the tale does not end there. Will the terrorists succeed in attacking the United States? Enter the FBI and CIA to do their best to foil the plot.

The fast-paced plot is, unfortunately, marred by a host of errors in grammar and punctuation, and a lack of attribution of quotes makes it difficult to tell who is speaking at any given time. Furthermore, the third person narrative switches over to the first person familiar at the beginning of the book. Those who can overlook such writing flaws will find a compelling thriller that would have been all the better with the services of a copyeditor.