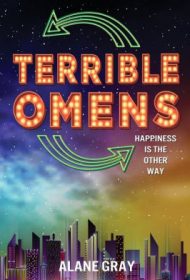 Author Alane Gray’s wicked, self-deprecating sense of humor turns the tale of her doomed marriage into a raucous, page-turning ride in Terrible Omens: Happiness is the Other Way.

Gray married “Darren Danky” (not his real name) one day after her 28th birthday. After briefly basking in the hormone-induced joy of their recent matrimony, their relationship took a sharp turn for the worse when the newlyweds moved into Darren’s parents’ cramped home to save money while establishing themselves in chiropractic practice. This proved an unfortunate choice after Darren’s mother discovered Gray’s journal—filled with “every last ounce of emotion” Gray had about the contentious drama of living with her mother-in-law— at the bottom of her underwear drawer. Thereafter, illicit copies of her confessions appeared around the house, with Gray’s name usually followed by the epitaph “Devil.”

The marriage continued to degenerate. Darren’s devotion to get-rich-quick schemes caused their fledgling chiropractic practice to fail. His homebrew hobby, then obsession, resulted in an explosion Gray hilariously dubbed “beer-pocalypse,” and led to full-time drinking. Games of “Peek-a-boo Penis” and other strange sexual proclivities provoked explosive arguments, and ceaseless mind games caused Gray to question her own reality.

Readers may become frustrated with Gray’s inability to act on the “flashing neon signs” that should have sent her running; only doing so when Darren proclaimed the union dead. This is easily overlooked, however, as Gray tells it all with a wry, David Sedaris-style humor that will have readers laughing out loud. In one facetious passage, Gray imagines evading Darren and his family by becoming a zombie. “With zombie strength and no active pain receptors,” she muses, “I could have exacted a degree of justice while I staggered and chomped my way toward the door.”

This autopsy of an ill-fated betrothal is raw, fast-paced and darkly funny—a guilty pleasure that should appeal to the voyeur in us all. Like a smoldering train wreck, readers will find it hard to look away.