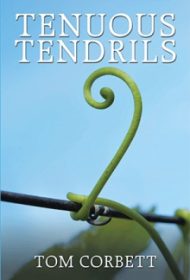 In Tom Corbett’s Tenuous Tendrils, an adult brother and sister reunite after decades of barely connecting and find themselves searching for answers to explain their past.

Josh Connelly is a professor at the University of British Columbia on the cusp of retirement. His younger sister, Rachel Connelly, is a doctor specializing in pediatric cancer. The two have been estranged for years after Josh fled the U.S. for Canada during the Vietnam War. Now visiting Josh to attend his retirement celebration, Rachel is determined to get her brother to open up about their years apart. The two pepper each other with questions and relive old memories. As the story progresses, Rachel meets Josh’s current friends, who are also joined by old friends and family. New relationships are established, old ones rekindled and unexpected truths revealed.

This character-driven tale is based largely on the past. When the two aren’t sharing stories, they often fall into reveries about events from their youth. While this can slow the pace, certain revelations—a theft from Irish mobsters, an ugly hit on the football field—also add depth to the characters. The story gains momentum as it progresses.

However, the protagonists’ behavior, particularly in early chapters, seems juvenile for two professional adults. In one scene, Rachel punches Josh in the stomach after sensing he’s about to shut her out. Moments later, she punches him again. Likewise, their language is often more fitting of teenagers, and the constant sarcastic banter grows tedious.

While the novel is professionally written and edited, the use of pronouns can be confusing. For example, Josh’s dog “Morris squatted to do his business. After picking up the delicacies, his attention focused on the panoramic view and then his interior view …” The “his” seems to reference the dog but actually refers to Josh.

Despite its issues, this is largely a fully rendered tale. Those interested in the complexities of relationships, both sibling and romantic, will find some rewards here.