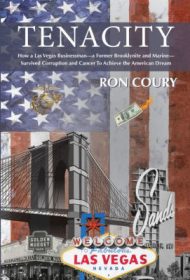 Whether it was his Brooklyn childhood, a stint in the Marines or, more significantly, his decades as a Las Vegas business entrepreneur, Ron Coury fought and won many uphill battles; thus, inspiring the title of this engaging memoir.

Coury traces his sometimes-stubborn pursuit of justice to age 16, when he helped fight off three punks who were beating up a neighbor boy. “This seemingly minor fight helped mold me into a defender of right…someone who understood the challenge of going against the odds…” he writes.

Coury followed that precept throughout his life: while a Marine, the founder of a Vegas empire of more than 20 businesses, and, later, when facing felony charges over a former employee’s false claims (he eventually cleared his name). Coury also successfully challenged corrupt government officials in a Nevada town where he wanted to build a casino. His biggest

fight, however, came in 2005, when he fought esophageal cancer, and won. Now, in his mid-60s, Coury devotes time to charities, a startup business and playing poker.

Coury is a wonderful storyteller. His writing is detailed and colorful, with touches of humor. For example, he tells of a practical joke he and his friends played on a buddy while on a cruise. When the joke was revealed, “We were all there, laughing so hard that, well, with all the water around, it’s likely some spillage occurred.” Another time, a man thrown out of Coury’s bar, retaliated by vandalizing his car. In “a scene straight out of The Godfather,” Coury asked two friends to buy “the biggest fish they have” at the local fish market, gift wrap it and drop it at the man’s front door. The next day, the man nervously repented to Coury, as if Coury were, in fact, a mob boss.

Such stories keep readers entertained throughout. Anyone interested in Las Vegas in 1970s and ’80s will enjoy it, as will anyone looking to be inspired by an American success story.