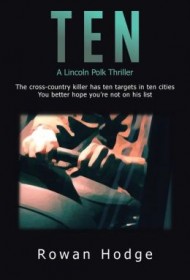 In this cross between the film Seven and America’s long-running obsession with reality television, debut novelist Rowan Hodge delivers a respectable police procedural centered on a tough but emotionally damaged FBI agent who is pitted against a serial killer with a bizarre agenda.

It begins when writer Charlie Gillespie pitches a new television series called Ten. After the murder mystery plays out on screen, home viewers vote on who they think the killer is. Then, actors such as Gary Sinese and John Cusack perform the denouement live on stage.

However, as soon as the hit show is aired, identical murders begin happening in the real world. Hodge recently revealed in an interview that this novel started as short stories composed from the point of view of a serial killer, and similar material is integrated here. However, the author also introduces a plausible protagonist in Lincoln Polk, a special agent for the FBI whose run-in with another murderer in Wyoming has left him skittish, as he slowly reveals to his Bureau-mandated shrink, Tracey Arnold.

The killer, meanwhile, has a fiendish proclivity for murder—strangling a professor in Boston, injecting a doctor in New York with deadly contaminated blood, burning a chef in Las Vegas, and so on. “What sort of logic could there be in this sort of crime?” Polk wonders. “…What sort of madness was this?”

Polk relentlessly pursues the killer cross-country, but Hodge breaks up the pursuit with interstitial segments that use transcripts, chat room sequences, and even song lyrics to offer sly commentary on American popular culture. As Polk gets closer to discovering the connection between his “Unknown Subject” and the hit show, Hodge lays on duplicitous reversals and plot twists to keep readers guessing.

At more than 600 pages, the book is ambitiously overlong, but fans of writers like Jeffery Deaver, authors who excel at pulling the rug out from under readers, will find a similar vibe —and satisfaction — in this story.