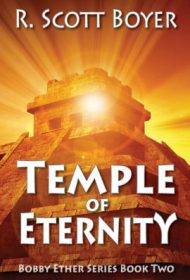 Temple of Eternity is the second book in a series of fantasy novels about Bobby Ether, a gifted teenager battling a dangerous organization called the Core.

Bobby, 17, previously attended the Jade Academy, a school for teens with a mixture of telepathic and metaphysical gifts. When he learns that his friends there have been kidnapped by the Core—a secret organization seeking to reshape mankind—he sets out with his cousin Jinx and a wise Navajo Indian, Chief, to attempt a rescue. Clues lead them to the Guatemalan jungle and an indigenous tribe settled near an ancient temple. The tribe believes the temple is haunted, but Bobby and his friends soon suspect the Core has imprisoned the children from the Academy there.

The story is full of action and adventure. As Bobby and Jinx set out to find the missing children, they are beset by dangers and challenges. When Bobby gets closer to the temple, spirits from the past invade his thoughts, introducing a second storyline about the Mayan people and the spirits haunting the temple.

Boyer includes an extensive cast of characters, including memorable villains such as Sandman, a commander who puts people to sleep with his mind, and the Scarlet Seer, a woman with half of her face painted crimson and the ability to control thoughts. While the plot of Temple of Eternity stands alone, readers may better appreciate who is who by reading Book 1 first.

Although the story is action-packed, it falters when it comes to emotional impact. There are some shocking incidents—a rape, a massacre of women and children, torture and experimentation—but the characters, particularly Bobby, are little, if at all, affected by their experiences. This causes a bit of disconnect for readers.

Thankfully, the pull of the plot is strong enough to overshadow this issue. Overall, YA fantasy fans will find Temple of Eternity a page-turning reading experience.