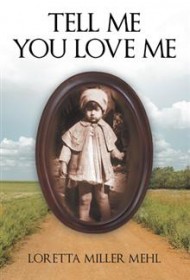 Loretta Miller Mehl was about 3 years old and looking downcast when the picture on the cover of her book was taken, circa 1930. If the cause of her sadness isn’t immediately clear, the book’s title offers a clue: While her memoir focuses on the poverty of her rural Arkansas upbringing, it also discusses the emotional poverty she felt as her father’s daughter.

Mehl writes of things she lacked as a poor farmer’s child: new shoes, a pencil for school—and her father’s affection. “He never shows any expressions of love toward me, although he quickly tells me if I displease him.” The author felt ashamed of her family’s poverty, first as sharecroppers living in a flimsy two-room shack and later, on their own meager farm eking out a living. “The shabby furnishings, dresses of cheap material, and an outhouse for a toilet embarrassed me,” she wrote.

While some anecdotes are amusing, as when a rare Christmas snow lured her parents into a snowball fight, mostly she voices her disappointments. Determined to escape her family’s poverty, Mehl moved to California immediately after high school and eventually raised a family of her own with more disposable income and with frequent expressions of her love for her children.

The author’s portrayal of her father as frugal and hardworking offers few, albeit well-chosen, glimpses of his emotional austerity. A more fully fleshed characterization would have enhanced the reading experience. In addition, readers will wish she had shared more about how she responded to his lack of affection: Did she withdraw? Was she angry? Did it affect her other relationships? Mehl is thorough and forthright about the impact of being poor but doesn’t give equal weight to the effects of feeling unloved.

Her descendants, however, will appreciate her detailed, unsentimental look at poverty. And she succeeds in her mission to pass on her family’s sad lasting lesson: “It’s not only how you live, but what you say that counts.”