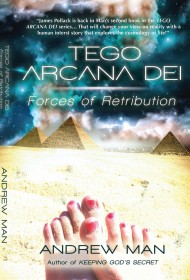 Andrew Man’s time-traveling hero, James Pollack, is back in business in this second volume of the action-packed science fiction series, Tego Arcana Dei.

Pollack’s current capers, subtitled Forces of Retribution, hurtle him through time from 2010 back to 2006 and forward to 2059. Sometimes he channels Indiana Jones, navigating underground tunnels at the Egyptian pyramids. Other times, he’s an interstellar James Bond, with high-tech gadgets to move him through parallel universes. Always, he’s surrounded by beautiful women.

The woman emphasized here is Alexei Marino, who finds herself pregnant with James’s male child in another dimension, where boys are no longer born. She needs to get back home to save this miracle in the making. James weaves a complex web of wormholes to whisk Alexei and her precious cargo to safety, all while battling his way through war zones, international financial meltdowns and even the climate change crisis.

Man supplies scientific explanations to support his story – particle entanglements and force fields abound – but the science is often lost in the breathtaking pace of the action. In fewer than 200 pages, we travel through Texas, Lebanon, Switzerland, Egypt, Bosnia, London, Zagreb, and New Mexico. Each destination lands us in a different time and maybe a different universe. It’s all a bit dizzying: just when we start rooting for Alexei and her unusual birth plan, we are whisked off yet again to a different scenario.

Distracting, as well, are spelling inconsistencies. It’s a challenge to keep track of the characters when their names are not always spelled the same way. An unconventional use of question marks at the end of many apparent statements – and a corresponding lack of such marks to denote actual queries – are also confusing.

Man draws his readers in with action scenes, explicit sex, and constant movement. But Tego Arcana Dei: Forces of Retribution’s whirlwind of action is perhaps too much for the average reader to absorb.