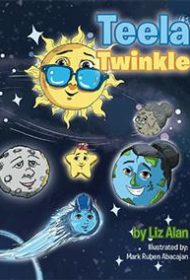 In Liz Alan’s picture book, Teela Twinkle is a star who yearns to outshine everything in the galaxy.

In a quest of that brightness, the star meets with one after another denizen of outer space, including a dashing Comet, beautiful Moon, scorching Sun, bossy Earth and finally a curmudgeonly Asteroid. Depicted in quirky illustrations by Mark Ruben Abacajan as large heads or faces, with most sporting human hairstyles and accessories such as a baseball cap and eyeglasses, these personified orbs keep reminding Teela that she can’t imitate or steal their brightness.

Teela’s first encounter, with a baseball-cap-wearing Comet, sets the stage for further interactions. When Teela asks the Comet if she could increase her brightness by dancing like he does, he tells her, “You can dance if you like, but you can’t glow like me. You’re a star, you twinkle.”  Not every encounter is as gentle. The Earth angrily scolds Teela, saying, “Now go far away, and don’t come back.”

Alan enriches the worthy message of learning to appreciate being oneself by underlining the value of friendship in achieving this. When Teela surprises the “cold and calloused” Asteroid by being kind to him, he not only recognizes her warmth but takes her advice to go on rumbling without creating disastrous celestial collisions. His appreciation of her makes her blush and beam, increasing her brightness thanks to her own inner goodness.

The text is rather dense on some pages. And toward the end of the story, the author depicts the Earth holding back from celebrating the harmony that has finally been created until the planet emits “a little fart.” Perhaps this will bring some giggles from kids, but in a book that’s not aiming at that kind of humor overall, the unnecessary incident distracts.

Nevertheless, this book presents a positive message that makes it a worthy read-aloud for youngsters.