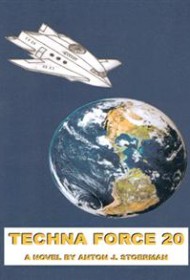 Audacious and contentious, Anton J. Stoerman’s science fiction adventure set in 2010 begins as a ho-hum “first contact” novel but quickly evolves into a deeply speculative, politically supercharged story that can arguably be classified as utopian fiction.

The storyline is provocative from the beginning. When an expeditionary force of humanoid aliens from Techna Planet discover Earth, it learns that the United States government’s master plan is to not only convert the nations of the world to a democratic form of government modeled after the “right-wing Christian Coalition concept,” but to also ultimately destroy all other inhabited planets in the universe. In response, Techna Force 20 — led by Commander Thor Berksten — sets out to either covertly reform America or destroy it.

The aliens are not only much more technologically advanced than humans, they have a stronger moral fiber. So instead of wiping out the States, which is described as essentially a wellspring of evil, Berksten and company begin changing it from within. With their ability to remove pivotal governmental leaders and put doppelgangers in their place, America begins its revolutionary transformation. The war in Iraq, for example, is immediately stopped and all troops are sent home. Nothing is safe from the sweeping reforms — the illegal drug trade, healthcare, Congress, etc. When all is said and done, America may not quite be a utopia (yet) but it is radically improved.

The political speculation is what obviously powers this novel, but Stoerman falters mightily with the science fiction elements, i.e: the visionary element is completely lacking. The aliens are exactly like humans and their home planet and native culture is precisely like ours. It seems highly unlikely that two intelligent lifeforms would evolve the same way physically and culturally on two different planets.

Although it’s a far from perfect novel, those who enjoy politically powered storylines will find the novel’s speculation intriguing. Others may deem the diluted science fiction elements disappointing.