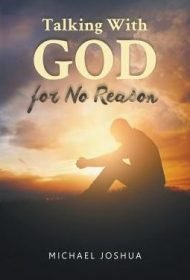 The free-verse poems that comprise Michael Joshua’s Talking With God for No Reason seek to document the speaker’s faith, worldview, and emotional life. They range in subject matter from self-help and religious verse to meditations on a variety of human experiences, including love, happiness, abortion, sexuality, and friendship.

Overall, the poems are short, sometimes only two or three lines. They rely almost exclusively on expository statements—telling readers something, rather than creating a vivid picture in readers’ minds. For instance, “Explain Experience” consists of one piece of advice for readers: “Never/ let anyone else explain life to you/ experience it yourself.” Other poems restate familiar messages, such as “Life is not a dress rehearsal” and “It is not what happens to a man/ but/ what happens within a man.” Many others reflect the speaker’s religious beliefs: “You are here/ for GOD/ GOD is not here/ for you.”

While the poet sometimes sets up promising scenes, ultimately, he fails to capitalize on them. In “Onset of a Depression,” for example, Joshua begins to describe an experience in physical terms that pique readers’ interest: “I have a sinking feeling falling deeper/ within myself […] twirling legs/ flailing arms…” Readers can visualize legs and arms in motion. Unfortunately, the poem fails to develop the image further, ending with the abstractions “obscurity and failure.” “Remembering You Through a Song” begins with an intriguing, concrete set-up: “I heard the song/ you said you could write/ if you were a songwriter/ as I sat in the hotel room alone.” But the poem again stops short, without enlarging the context to explore the relationship between the “I” and the “you.”

With the bulk of these poems centering on statements of opinion and advice, rather than offering sensory and narrative details that would resonate with readers, the work falters. As a result, this collection is most likely to appeal to the author’s friends and family, rather than to serious readers of contemporary poetry.