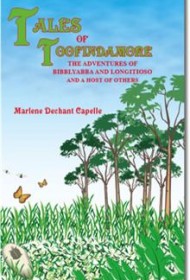 Marlene Dechant Capelle has written a warm-hearted chapter book for young readers who thrive on tales of magic, adventure and curmudgeonly wizards.

When Bibblyabba’s fisherman father Mondog disappears at sea, the nine-year-old is the only one on the small island of Toofindamore who believes his father will find a way home. With the help of a village elder named Jimjak, a mysterious wizard known as Pildafud and a loving and generous unicorn named Longitioso, Bibblyabba learns to follow his dreams and his heart.

Bibblyabba is tested over and over again by the clever wizard Pildafud as the boy tries to find his father. The wizard challenges Bibblyabba with a variety of tasks, puzzles, and problems. As the boy learns to listen, follow instructions, be truthful, kind and loyal, he also begins to understand that he can solve any problem he sets his heart on. Needless to say, he finds his lost father. But there’s barely time to celebrate and relax before the tiny island is surprised by pirates and more magic adventures ensue.

If anything, Tales of Toofindamore suffers from one adventure too many. The story of a young boy using magic and his wits to find a lost father is rich enough to serve as a complete novel. The addition of pirates and a kidnapped orphan feels tacked on and would be better saved as material for book two. Also, the deus ex machina ending disappoints. Spoiler alert: if you don’t want to know the ending, don’t read on! The whole story is revealed to be the imaginative play of a little boy in his bedroom. When readers believe whole-heartedly in the imaginative world an author has created, they will resent reading to the conclusion, only to find out they’ve been tricked.