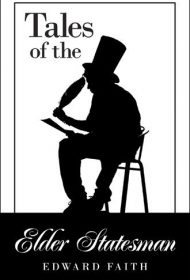 Edward Faith’s Tales of the Elder Statesman is a collection of 80 brief stories (averaging two to three pages each) set in fictional Rough Edge, Alabama. Most center on the eponymous “Elder Statesman,” a verbose, curmudgeonly, and inadvertently hilarious plant foreman with countless other side hustles.

The recounting of this character’s misadventures weaves a tapestry of the local culture: hunting, fishing, bootlegging, bar fighting, and just shooting the breeze. The Elder Statesman, however, isn’t so much a protagonist as a fulcrum for leveraging situational comedy from all the other colorful folk of Rough Edge: The Statesman’s neighbor spends years referring to a nearby fabric store owner as “Mrs. Swaf,” only to learn the “SWAF” on the store sign refers to “Southwest Alabama Fabrics”; the Statesman employs a slightly neurotic friend as a lookout for his moonshine still, only to have the jumpy man overreact to the Statesman’s barking hound and toss the whole setup in the river; a friend of the Statesman is, through a convoluted turn of events, mistaken for a burglar while trying to return a child to her parents in the middle of the night.

Rough Edge is like Lake Wobegon for Southerners, a time capsule of a not-quite bygone era populated with colorful characters. The stories, at their best, are very funny, but more often they’re only mildly amusing, and sometimes don’t land the punchline. The characters are charming, but even at this abbreviated length, some stories overstay their welcome. The rhythms are formulaic and there are few surprises.

Overall, this is a heartwarming collection, perhaps not as manicured as it could be, retaining some rough edges (pun intended) and uneven in quality. It’s amusing but rarely deep, and earnest but not always interesting. It’s a folksy, authentic slice of life for an underappreciated lifestyle, one that introduces readers to unexpected new friends— some who turn out to be more fun to be around than others.