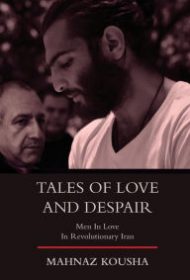 The eight stories in Mahnaz Kousha’s collection are linked by the turbulent times that swept Iran during the last quarter of the 20th Century. The Shah’s fall and subsequent revolution, the Manjil-Roodbar earthquake that killed as many as 50,000 people, and the war with Iraq changed Iranian society on every level. Kousha’s stories offer a seldom-seen insider’s view of the country during those times.

Kousha says that she intended to follow her 2002 sociological study Voices from Iran: The Changing Lives of Iranian Women with a similar, male-focused study. But in her research, the male interviewees were reluctant to open up. “Respecting their silences meant missing a coherent account,” she writes. “Faced with such gaps, I had no solution but to change genres to create room for untold details and suppressed emotions. I needed the freedom and permissiveness of fiction.” Thus, her debut as a short story writer.

The author’s well-drawn main characters are men whose lives were forever altered by the events surrounding them, men caught up between long-held traditions, family duties, love, and the restructuring of Iranian society. There’s Ismael, a devoted son, crushed when his love for young Solmaz is rejected, who goes off to die in war rather than live without her; there’s Parviz, trapped in a marriage to a materialistic, shallow woman who forces the family to move to Canada, stealing Parviz’s one joy in life, his secret piano lessons; there’s Hamed, a jeweler’s son pushed to marry a gold digger by his parents. These men, and those in the other stories, manage to survive, some happily, some with sad resignation.

Kousha is talented writer and storyteller. Her characters, grinding through a world they did not create and cannot escape, are believable and sympathetic. Ultimately, she demonstrates that there’s much more to Iranian life than politicians and the media would have us believe. Students of contemporary history and politics—and anyone who appreciates nuanced writing—will enjoy reading Kousha’s stories.