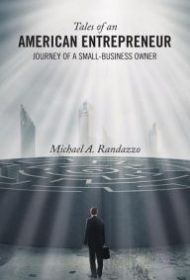 North Carolina entrepreneur Michael A. Randazzo has written a business book aimed at advising both the budding and seasoned small-business owner.

Raised by an Italian immigrant barbershop owner, Randazzo became a professional hairstylist and, in 1993, opened his first location for Harmony Salon and Spa in Charlotte, North Carolina. Harmony Salon has won several awards, including ranking 32 out of the top 50 fastest-growing businesses in Charlotte and among the Top 200 Fastest-Growing Salons in North America.

In this volume, Randazzo tells parts of his own personal story, including how he negotiated business leases and build outs, meticulously kept track of business spending and profit, and even made personal investments through the stock market. He also offers advice to others on finding one’s first business location, setting up a second location, how to deal with losing top employees, ways to advertise, how to manage the business’s money and other topics.

The author certainly offers many detailed tips concerning money management. However, he isn’t very thorough concerning other aspects of entrepreneurship, such as dealing with employees who leave the business (where his discussion is limited mostly to noting that the first time he lost an employee he became physically ill and to advising readers to keep cross-trained employees on hand as replacements). There are also times when some of his points seem irrelevant, such as his narrative about negotiating a good deal on his new luxury home and his many religious and anti-Obama, anti-taxation-of-upper-income-brackets views.

In short, while one can gain some interesting tips here, the book will not leave readers feeling wholly educated. Note: Readers should also be aware that due to the author’s personal opinions, the most suitable audience is likely to be Republican and Christian, rather than secular, readers.