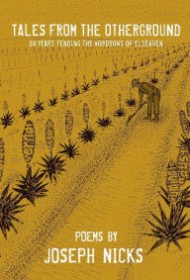 Joseph Nicks’ collection, Tales from the Otherground, comprises lyric and narrative poems that trace the speaker’s life relative to the physical world.  The poems, a mix of highly accomplished and lesser work, demonstrate an expansive lexicon and range of images that often intensely engage the senses.

The poems are typically rooted in a concept or idea the poet is eager to explore, which makes for a substantive collection. One example is “Gorilla ² (a Noah count poem),” in which the poet reflects, humorously and insightfully, on the biblical flood, noting the many challenges Noah faced in rounding up two of each animal species. It begins compellingly: “it must’ve gone something like this, at first:/ Bison²/ Hyaena²/ Rattus²/ Lynx²/ …but soon he must have found/that very few creatures/are so easily squared/away…”

Nicks is likewise at his best when he harnesses fresh imagery to musical language.  One standout example is “Origin,” where he writes: “up on the roof/ in summer/ with your hammer/ in your hand,/ nails gleaming/ in the moonlight,/ driven freshly/ through the lumber/ on a late/ tar-papered night:” The “m” alliteration (“summer,” “hammer,” gleaming,” etc.) creates a vibrant, linguistic pattern, and “late/tar-papered night” helps readers picture something quotidian in a fresh way.

On the lesser side, some poems default to singsong rhythms and generalizations that distance readers: “even though i’ve grown more/ meaningless than i ever was before,/ got a girl and a handful of good friends—/ who could ever ask for more?” Others feature undergirding concepts that are overly familiar, such as the idea of a caterpillar transforming in its chrysalis.

Weeding out weaker poems that rely on clichéd examples and whose subject matter is less urgent and provocative would refine the collection, as would avoiding singsong end rhyme, excessive abstractions and antiquated diction. That said, there is much to appreciate in these pages. Despite its unevenness, Tales From the Otherground marks the debut of a promising poet.