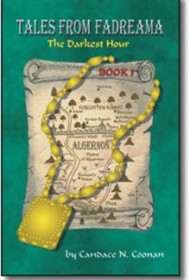 The Darkest Hour is the first of five books for young adults and adults presently available in Canadian author Candace Coonan’s Tales from Fadreama series. Coonan uses this first novel to introduce the characters and build her fantasy world. The Darkest Hour is filled with adventures and, surprisingly, the continual deaths of major players. Additionally, the author presents potential romances, which might be fleshed out in later episodes.

The adventures begin as Ms. Craddock, head mistress of an orphanage in the Forgotten Forest, finally informs four sisters who have lived there a dozen years about the circumstances of their placement in the mysterious institution. Ms. Craddock also tells them that they must leave the orphanage and go on a dangerous mission to find the lost Prince Edric in order to help him replace the evil Raltson Radburn, who has taken over the kingdom.

Alone in the forest, the sisters meet with Nissim, the centuries-old wizard who points them in the right direction for their quest. Emma, the oldest, is the leader; Clara longs for adventure; Lily is controlled by emotion and has a gift for prophecy; but it is through Alice, the youngest and most fearful, that Coonan filters her story.

The Darkest Hour is an admirable first novel with only minor problems. Among the most notable: in her episodic style, the author presents a new adventure in nearly every one of her 38 chapters; just as readers are getting interested, someone dies or the principles are left in disarray, and it’s off to the next conflict. In addition, Coonan frequently uses modern idioms (such as the aforementioned Ms.), which seem out of place in the sword-and-sorcery fantasy world she has created. It will be interesting to see how this young author’s style and skill evolve as the series progresses.