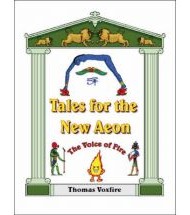 The stories in Tales for the New Aeon: The Voice of Fire are, according to its author, Thomas Voxfire, fictional accounts of the tenets of Aleister Crowley. Crowley was an English occultist with a rather dark reputation. An erstwhile member of the magical order known as the Golden Dawn, he eventually gathered students and founded his own philosophical school, which he called Thelema.

The stories in Voxfire’s book may be loosely ranged under the categories of science fiction, fantasy, horror, and contemporary mythology. Like Crowley’s teachings, they are iconoclastic and sardonic. They reflect Crowley’s disdain for hypocrisy and his view of sex as a powerful esoteric force.

Many of the stories involve aliens, spirits, or gods who serve to deflect civilization from its current path, for better or worse. In “Venus and the Preacher,” for instance, Venus chooses the son of a materialistic preacher as her instrument to rid the world of repression and disseminate her view of “the universe and the gods, of male and female and their right relation to each other….” As the book’s title suggests, the tales also portend the coming of a new age, with a concomitant change in a world paradigm for man.

What Voxfire does right in this book is to produce driving plots that compel the reader to turn the pages. He has a good sense of pacing and, with few exceptions, holds the reader’s attention in a capable manner. Where the book falters, however, is in its almost unremitting sassiness and sarcasm. After awhile, the reader longs for a variance in tone and some simple sentences lacking in irony. There are also numerous typos in the edition that detract from the reading experience.

While these drawbacks preclude the book from attracting a wide audience, some occultists and readers of science fiction and fantasy may nevertheless enjoy the contents of Tales for the New Aeon.