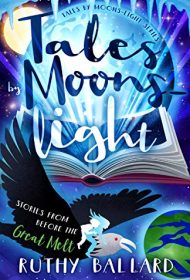 In the prologue of Ruthy Ballard’s second book in a middle-grade series, the author/narrator sets the stage by confessing that she stole a book of stories presumably handed down over many years by the inhabitants of Urth, a distant two-mooned planet. After choosing her favorite stories and adding illustrations, she created her own book: “[t]he special edition for Earth children you’re now reading.”

The book is comprised of seven tales. In the first, an evil sorceress kidnaps and enslaves Margie and her brother Hal. The sorceress proclaims she rules the sun and Urth’s two moons and warns the siblings that if they don’t clean the castle well enough, she’ll “order the sun to burn [them] to a crisp.” Then one day, an old bird, also captive, tells Margie if she can solve three riddles, the sorceress’s spell will break. When Margie is successful, the bird grows to the size of a horse and ferries the siblings back home.

In another tale, a rich man lives miserably, consumed by his six woes. When a charlatan comes to town, masquerading as an eminent sage, the rich man pays him handsomely to solve his problems. But each time one problem is solved, it’s replaced by another—a consequence of the solution itself. The ending is both surprising and bittersweet.

Ballard’s writing is stellar. Her tales unfold seamlessly with inventive, imaginative plots and a creative cast of characters, both human and animal. In some tales, characters solve interesting problems related to astronomy, and Ballard’s soft, black-and-white illustrations, skillfully rendered, nicely enhance the text.

Young readers will be moved by the characters’ hardships and buoyed by the book’s humor and frequent word play (e.g., Urth’s creatures have quirky names: “P-siders” are spiders; “gips” are pigs, and a young gip is a “gipitty”; at a “Renaming Ceremony,” Urth adolescents scramble the letters of their given name to create a new one).

Engaging readers with its originality and quirkiness, this is an enchanting book.