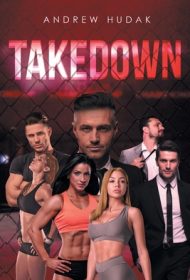 Featuring familiar hard-boiled cops and Italian crime families, Takedown is like a reliable spaghetti sauce recipe with a few unexpected ingredients added to the mix.

The book opens with its main protagonist, River City Police officer Sarah Kolchek, going undercover to arrest a rapist who has been attacking women in the park. After her success, she’s assigned a much more dangerous undercover job, investigating the deaths of women whose bodies have been found in the river. The women may have been involved in a fight club tied to Leo Manetti, son of Mike “The Hammer” Manetti, the man who lords over River City’s gang economy. Kolchek is tagged for the job because she used to be a professional mixed martial arts fighter herself.

A low-level mobster, Vinny DiGrazio, had been arrested delivering drugs from the Manetti family’s pizza joint, and he claimed the River Murders resulted from his employer’s all-women MMA fights held behind a nightclub, where the Manetti mob also runs an illegal casino.

Except for the women fighters, the story is a standard mob/cop plot, and author Andrew Hudak, a contributor to his brother’s Hudak on Hollywood website, knows these storylines well. His characters seem straight out of central casting, speaking and acting like those in countless movies. When Vinny, who owes a gambling debt, sees Leo Manetti after a long absence, Manetti says “You! I never thought I’d see you again you little prick! Where’s the ten grand?”

In the end, Takedown does take down the bad guys and ties up loose ends like a good Hollywood movie. But it doesn’t quite rate a thumbs-up review.